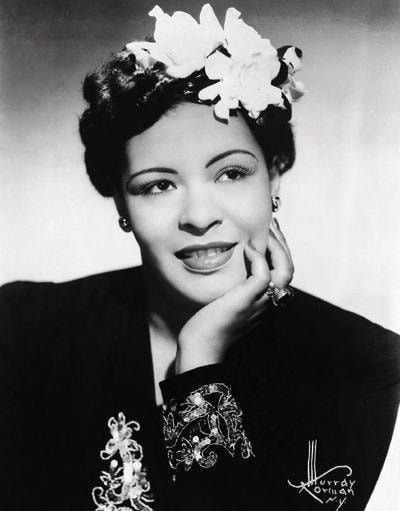 Considered by many to be the greatest jazz vocalist of all time, Billie Holiday lived a tempestuous and difficult life. Her singing expressed an incredible depth of emotion that spoke of hard times and injustice as well as triumph. Though her career was relatively short and often erratic, she left behind a body of work as great as any vocalist before or since.
​ As a young singer Holiday became part of the vibrant Harlem Renaissance scene, performing in nightclubs and jazz clubs.
BIOGRAPHY
Born Eleanora Fagan in 1915, Billie Holiday spent much of her young life in Baltimore, Maryland. Raised primarily by her mother, Holiday had only a tenuous connection with her father, who was a jazz guitarist in Fletcher Henderson’s band. Living in extreme poverty, Holiday dropped out of school in the fifth grade and found a job running errands in a brothel. When she was twelve, Holiday moved with her mother to Harlem, where she was eventually arrested for prostitution.
Desperate for money, Holiday looked for work as a dancer at a Harlem speakeasy. When there wasn’t an opening for a dancer, she auditioned as a singer. Long interested in both jazz and blues, Holiday wowed the owner and found herself singing at the popular Pod and Jerry’s Log Cabin. This led to a number of other jobs in Harlem jazz clubs, and by 1933 she had her first major breakthrough. She was only twenty when the well-connected jazz writer and producer John Hammond heard her fill in for a better-known performer. Soon after, he reported that she was the greatest singer he had ever heard. Her bluesy vocal style brought a slow and rough quality to the jazz standards that were often upbeat and light. This combination made for poignant and distinctive renditions of songs that were already standards. By slowing the tone with emotive vocals that reset the timing and rhythm, she added a new dimension to jazz singing.
​By the late 1940s, after the death of her mother, Holiday’s heroin addiction became so bad she was repeatedly arrested— eventually checking herself into an institution in the hopes of breaking her habit. By 1950, the authorities denied her a license to perform in establishments selling alcohol. Though she continued to record and perform afterward, this marked the major turning point in her career. For the next seven years, Holiday would slip deeper into alcoholism and begin to lose control of her once perfect voice. In 1959, after the death of her good friend Lester Young and with almost nothing to her name, Billie Holiday died at the age of forty-four. During her lifetime she had fought racism and sexism, and in the face of great personal difficulties triumphed through a deep artistic spirit. It is a tragedy that only after her death could a society, who had so often held her down, realize that in her voice could be heard the true voice of the times.

See the Tribute to Billie Holiday 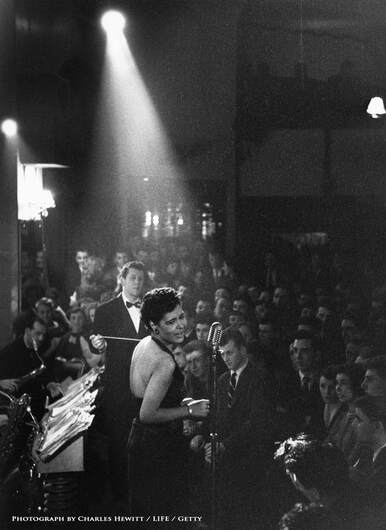