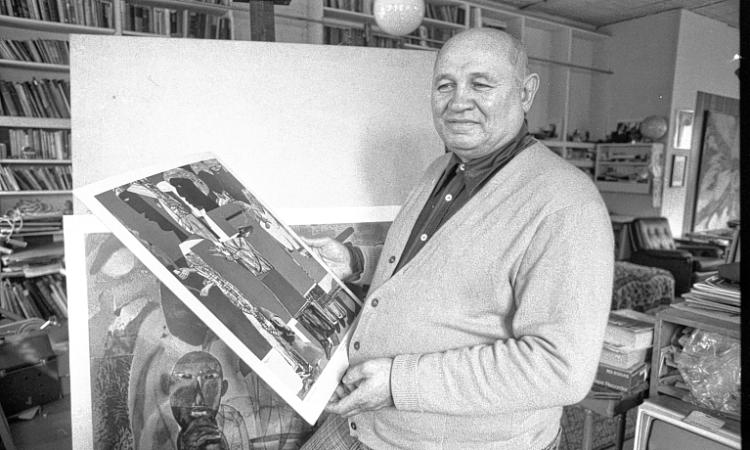 Born September 2, 1911, in Charlotte, North Carolina - March 12, 1988, died in New York City​
BIOGRAPHY
During the early 1920s the period of cultural flowering in the African American community known as the Harlem Renaissance was in its formative stages. The Bearden apartment on West 131st Street in Harlem was a frequent gathering place for such intellectuals as W. E. B. Du Bois, Paul Robeson, and Countee Cullen, as well as artists Aaron Douglas and Charles Alston, and jazz musicians Fats Waller, Duke Ellington, and Andy Razaf. The Lincoln Theatre, Savoy Ballroom, and a number of other night spots were only a few blocks from the Bearden apartment, and Bearden became deeply immersed in jazz and the Blues as an adolescent.
The works of Bearden’s cover a wide range of techniques, themes, and styles. In college, Bearden aspired to be a cartoonist, drawing for and then editing Boston College’s humor magazine in the early 1930s. He continued his cartooning after he moved to New York City to attend New York University. Studying for medical school, he graduated with a Bachelor’s Degree in science.
Bearden is perhaps best known for his collage and photomontage compositions, which he began creating in the mid-1960s. During this time, he felt he was struggling in his art between expressing his experiences as a Black man and the obscurity of abstract painting. For Bearden, abstraction wasn’t clear enough for him to tell his story. He felt his art was coming to a plateau, so he started to experiment again. Combining images from magazines and colored paper, he would work in other textures such as sandpaper, graphite and paint. Influenced by the civil rights movement, his work became more representational and socially conscious. Although his collage work shows influence of abstract art, it also shows signs of African American enslaved crafts, such as patch-work quilts, and the necessity of using whatever materials are available. Taking images from mainstream pictorial magazines such as Life and Look and Black magazines such as Ebony and Jet, Bearden crafted the African American experience in his works.
By age 58, Bearden had reached a level of recognition (and income) that he was able to become a full-time artist with his own studio. He earned grants and commissions and was often a visiting professor at universities.

​By the 1960s, his medium of choice had moved from painting to collages, though he continued to paint large scale murals and series pieces for museum and gallery exhibitions. Among Bearden's many awards and honors were his election to the American Academy of Design and the National Institute of Arts and Letters. In 1987, one year before he died, Romare Bearden received the National Medal of Arts from President Ronald Reagan.

Though he was still working in his studio, Bearden contracted bone cancer and on March 12, 1988, died in New York City. In the last few years of his life, Bearden and his wife made plans for a foundation that would aid in the education and training of talented art students. The Romare Bearden opened in 1990. ​