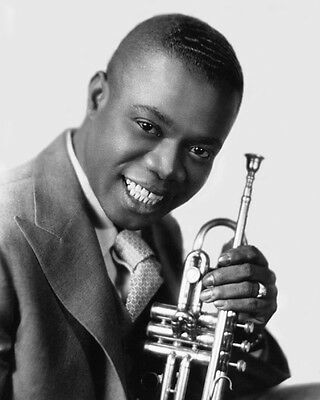 During the 1920s, Louis Armstrong brought a huge impact during the Harlem Renaissance within the Jazz world. The music he created was an incredible part of his life during the Harlem Renaissance.  His impact touched many, including a well-known man during that time named Langston Hughes. The admiration he had for Armstrong and acknowledging him as one of the most recognized musicians during the era.  Within Hughes writings, he created many books which held the central idea of jazz and recognition to Armstrong as one of the most important person to be part of the new found love of their culture.  The sound of jazz, along with many other musicians such as Armstrong, helped shape Hughes as a writer. Just as the musicians, Hughes wrote his words with jazz.
Armstrong changed the jazz during the Harlem Renaissance. Being known as "the world's greatest trumpet player" during this time he continued his legacy and decided to continue a focus on his own vocal career. The popularity he gained brought together many black and white audiences to watch him perform.
BIOGRAPHY
Louis Armstrong was born in New Orleans, Louisiana on August 4, 1901. He was raised by his mother Mayann in a neighborhood so dangerous it was called “The Battlefield.” He only had a fifth-grade education, dropping out of school early to go to work. He grew up in dire poverty in New Orleans, Louisiana, when jazz was very young. As a child he worked at odd jobs and sang in a boys’ quartet. In 1913 he was sent to the Colored Waifs Home as a juvenile delinquent. There he learned to play cornet in the home’s band, and playing music quickly became a passion; in his teens he learned music by listening to the pioneer jazz artists of the day, including the leading New Orleans cornetist, King Oliver. Armstrong advanced rapidly: he played in marching and jazz bands, becoming skillful enough to replace Oliver in the important ​Kid Ory band about 1918, and in the early 1920s he played in Mississippi riverboat dance bands.An early job working for the Jewish Karnofsky family allowed Armstrong to make enough money to purchase his first cornet.
Armstrong was playing trumpet, and his technique was superior to that of all competitors. Altogether, his immensely compelling swing; his brilliant technique; his sophisticated, daring sense of harmony; his ever-mobile, expressive attack, timbre, and inflections; his gift for creating vital melodies; his dramatic, often complex sense of solo design; and his outsized musical energy and genius made these recordings major innovations in jazz.