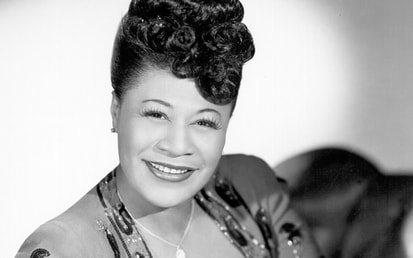 ​Ella Fitzgerald was well known throughout the Harlem Renaissance for her musical talent. Like Billie Holiday, she was one of the inspiring women that brought passion in the Renaissance. Fitzgerald has won her name "First Lady of Song" or "First Lady of Jazz" proudly with her beautiful voice. Many people have been touched by her songs.  Ella Fitzgerald was the "Lady of Jazz" and brought her vocal talent to impact the Harlem Renaissance.
BIOGRAPHY
Ella Jane Fitzgerald was an American jazz singer, sometimes referred to as the First Lady of Song, Queen of Jazz, and Lady Ella. She was noted for her purity of tone, impeccable diction, phrasing, timing, intonation, and a "horn-like" improvisational ability, particularly in her scat singing.

Born on April 25, 1917, in Newport News, Virginia, singer Fitzgerald was the product of a common-law marriage between William Fitzgerald and Temperance "Tempie" Williams Fitzgerald. Fitzgerald experienced a troubled childhood that began with her parents separating shortly after her birth.

With her mother, Fitzgerald moved to Yonkers, New York. They lived there with her mother's boyfriend, Joseph Da Silva. The family grew in 1923 with the arrival of Fitzgerald's half-sister Frances. Struggling financially, the young Fitzgerald helped her family out by working as a messenger "running numbers" and acting as a lookout for a brothel. Her first career aspiration was to become a dancer.
The 1950s and 1960s proved to be a time of great critical and commercial success for Fitzgerald, and she earned the moniker "First Lady of Song" for her mainstream popularity and unparalleled vocal talents. Her unique ability to mimic instrumental sounds helped popularize the vocal improvisation of scatting, which became her signature technique.
Dubbed "The First Lady of Song," Ella Fitzgerald was the most popular female jazz singer in the United States for more than half a century. In her lifetime, she won 13 Grammy awards and sold over 40 million albums. Her voice was flexible, wide-ranging, accurate and ageless.