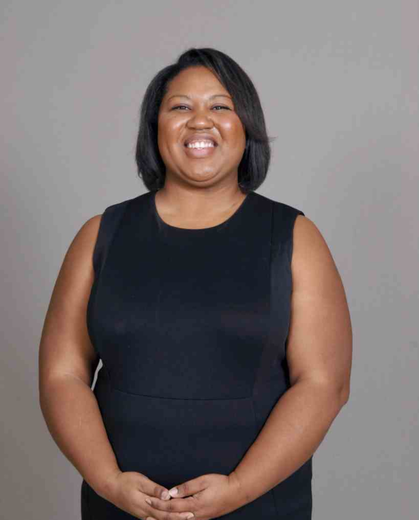 TRIBUTE TO Marian Anderson
“I'll Be Seeing You”
Performance by Cherisse Bonefont
BIO​
CHERISSE R. BONEFONT
Cherisse R. Bonefont is a musical “jack of all trades”. She is a Soprano, an actress, a dancer, a Church Youth Choir Director and, most recently, the Founder/Artistic Director& Conductor of the Essence of Harmony Choral Society.


The Essence of Harmony Chorale Society was born of a need to create a presence of space for, and medium through which singers of all skill levels can share their musical gifts with the Moorestown, NJ community, and the Burlington County community at large.

In 2018, after becoming more involved in the choral community nationwide, our founder, Cherisse, saw a need for an inclusive community choir, where choral pieces written by composers of diversity can be highlighted. Pieces by African Americans, Women, and the LatinX community, to name a few. Outside of a few choirs within the state, there was not space for singers to fully embrace all cultures and showcase classical and contemporary voices. EHCS seeks to fill that void and start, not only a choir but a movement, where others might see and be inspired to do the same in their communities.

MORE ABOUT CHERISSE
Having moved to Colorado in 1994, Cherisse was afforded the opportunity to attend Colorado State University, where she majored in Music Education/Performance and minored in Dance. After returning to NJ in 2000, she eventually discovered her stage talents through New Jersey’s vast community theatre family where she became highly active and appeared in many roles. Her stage credits have included: Ragtime: In Concert (Ensemble), Dreamgirls (Charlene/ensemble), Aida (Ensemble), and The Wiz (Aunt Em/Ensemble) all with Mystic Vision Players of Linden, NJ. For her role as Aunt Em, in The Wiz, she received an NJACT Nomination for Outstanding Ensemble Actress in a Musical. She was also cast in a concert performance of The Gershwin’s: Porgy and Bess, in February 2017, at the Union County Performing Arts Center in Rahway, NJ. She has also participated in the Summer Choral Festival at Westminster Choir College in Princeton and was accepted into Chorus America’s Conducting Academy in July 2019. Additionally, she is a member of ACDA (American Choral Director’s Association), Chorus America, Delta Omicron Professional Music Fraternity, and NANM (National Association of Negro Musicians).

Cherisse is a lifelong member of the AME church and was a Member of Bethel AME Freehold before moving to Lumberton. While at Bethel Freehold, she was not only the Director of the Senior Choir but was also the Artistic Director and Conductor of their Annual Community Holiday Concert. 2019 was Cherisse’s fourth time leading this concert and third time conducting Handel’s Messiah. It was their largest concert to date, hosting 32 choristers,15 instrumentalists in the orchestra, and 2oo audience members in attendance. After moving to Lumberton, she became a member of Bethel AME Moorestown where she is the Director of the Youth Choir and hopes to conduct the full Messiah there once the threat of Covid-19 is over.

However, right before the Covid-19 epidemic, Cherisse was able to see one of her biggest dreams fulfilled. She founded a community choir, the Essence of Harmony Choral Society. The Mission & Vision of EHCS is that We are dedicated to bringing joy and culture to our community by celebrating the voices of singers of diverse cultures and backgrounds by presenting beautiful choral music through high-quality performances.