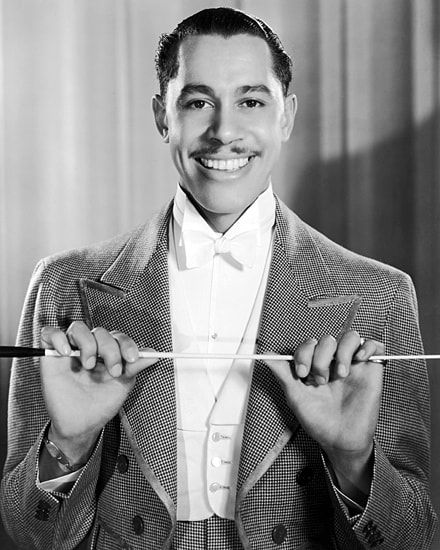 A premier black entertainer of the Harlem Renaissance, Cabell (“Cab”) Calloway’s impressive singing ability and As an American jazz singer, dancer, bandleader and actor, he was associated with the Cotton Club in Harlem, New York City, where he was a regular performer and became a popular vocalist of the swing era. His niche of mixing jazz and vaudeville won him acclaim during a career that spanned over 65 years.Calloway was a master of energetic scat singing and led one of the United States' most popular big bands from the early 1930s to the late 1940s. His band included trumpeters Dizzy Gillespie, Jonah Jones, and Adolphus "Doc" Cheatham, saxophonists Ben Webster and Leon "Chu" Berry, guitarist Danny Barker, bassist Milt Hinton, and drummer Cozy Cole.
BIOGRAPHY
In 1931, Cab and his manager, Irvin Mills, put together a song that will forever be identified with Calloway: "Minnie The Moocher." The tune sold over one million copies and the group soon broke every existing record for all-black band audiences. The success of "Minnie the Moocher" and its steady gig at the Cotton Club had Cab's big band in constant demand. The group spent quite a bit of time on the road and when racism reared its ugly head Cab used proceeds from the Cotton Club and "Minnie" money to travel lavishly by chartered train.

In 1930, the Cotton Club emerged as a hip new club in Harlem known for its lavish stage shows and talented musicians like Duke Ellington. Cab's singing and showmanship captured the attention of the owner and his band was hired to replace the Ellington's band.